SLAMeroun 2021 : Art for the Anglophone crisis

The 3rd edition of the international festival SLAMeroun, which took place from 24 to 27 June in Yaoundé and Buea, had this year as its theme ‘Art for the Anglophone crisis’.

The context of the third edition of the festival is still very uncertain. The Anglophone crisis has been going on for more than five years and continues to cause concern both within and outside Cameroon. To date, the conflict has left thousands dead, over one million displaced and the escalation of violence in the North and South West is far from over. Buea is one of the Cameroonian cities severely impacted by the political crisis that divides Cameroon. “Through a series of activities including concerts, debates, writing workshops, film screenings and the National Slam competition, we want to put the spotlight back on the Anglophone drama but also to think about the ills of our Anglophone brothers with our words,” explains Faithfull Baana Enono Arnaud, director of the SLAMeroun festival. With the theme ‘Art for the Anglophone crisis’ the SLAMeroun festival, which promotes the exchange of artists between local and foreign slam artists, has shown that the solutions to the the ills that are tearing Cameroon apart are also artistic.

Dialogue was at the centre of this third edition of the festival, thanks in particular to the conference debates. In Yaoundé, the museum La Blackitude was chosen to host the conference on the theme ‘Youth and radicalisation in NoSo’ (Northwest Southwest). While in Buea, the Alliance Française and the University hosted the conference on ‘Solutions to the Anglophone problem in Cameroon’. During these two conferences, it became clear why young people fall into a process of radicalisation and what the methods of prevention are, but also how, in the cultural field, we can ensure stability and sustainable social cohesion in the northern and southwestern regions of Cameroon.

Several international slam artists were present in Buea : Fatine Moubsit from Morocco, Philip Meersman from Belgium, Kikete from Kenya, Meriem Bouraoui from Algeria and a strong Nigerian delegation composed of Bash Amuneni, Jamila Abbas, Paul Tony and Augusta Imomon. They joined the many local slam artists who also participated. “This is an opportunity for them to develop, express and joyfully voice out their zest for life and their creativity. Free in their capacity to innovate, their audacity to invent. A joyful symphony of voices, reactions, declarations, coming from young and old, from different horizons, each in their own way. With a lot of joy, spontaneity and conviction”, describes Faithfull Baana Enono Arnaud.

For four days, the SLAMeroun festival aimed to “culturalise the Anglophone crisis” in order to finally propose solutions to this crisis that has already caused enormous material damage and human losses. If culture is not always sufficiently exploited as a means of consolidating peace and living together, the organisers of this international poetry slam event had the opportunity to demonstrate that “culture is also the solution to evil”.

An impression of the festival in the video below. 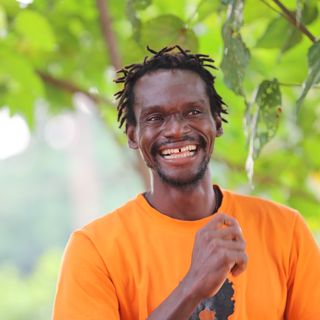 This interview took place before the festival started.

The Slameroun festival wants to propose artistic solutions to the Anglophone crisis. Can you tell us more about the 2021 edition of the SLAMeroun Festival?

The third edition of the SLAMeroun International Festival, scheduled for June 24-27, 2021 and which will deploy its verses and figures of style in the city of Buea with the theme ‘Art for the Anglophone crisis’, is a pretext for us to culturalize the situation in NoSo and to find solutions for a lasting peace and cohesion in these regions of Cameroon. This will be done through a series of activities such as: debates, slam poetry concerts, exhibitions, writing workshops and a national slam poetry competition. This year, we will have international artists from Nigeria, Kenya, Belgium, Algeria and Morocco to enrich our approach to respond to the situation that is destabilising the North West and South West regions.

By choosing to dedicate this edition to the Anglophone crisis, we wanted to give a voice to the youth so that they, through art and our festival, could give their opinion on the different ways to return peace to these regions of Cameroon. A sort of Grand Regional Dialogue 100% youth. We also want to show the decision-makers that the solutions to our problems are also artistic since our festival offers diverse platforms for exchange to all the people of our society without any distinction.

Today, do you think that art, especially slam, can be a medicine against all the divisions we see in your country?

Until today, the world is looking for an effective medicine for our ills and we can see that our politicians believe they have tried everything to no avail, so we have a very unifying tool that promotes freedom of expression, called the ‘Slam’, and the performance of the slammer Amanda Gorman at the inauguration of the American president Joe Biden, is proof that the slam allows any individual to express himself and propose solutions to our differences through various slam texts that can be sources of inspiration for our decision-makers who will then be able to adopt new strategies for a more preponderant living together in Africa and in the world.

Who are the artists expected at this edition?

Despite certain constraints imposed by covid-19 on the mobility of people, we will nevertheless have some international guests. These are Fatine Moubsit from Morocco, Philip Meersman from Belgium, Kikete from Kenya, Meriem Bouraoui from Algeria and a strong Nigerian delegation composed of Bash Amuneni, Jamila Abbas, Paul Tony and Augusta Imomon. They will join local slammers taking part in the festival.

We also note that the festival coincides with the Grand National Slam. How is the competition being prepared and what can we expect?

The Grand Slam National sixth edition is one of the main articulations of the International SLAMeroun Festival. It is quite natural that one of the selection phases of the national slam competition will be held on 24 June 2021 at the Blacktitude Museum after the panel discussion on Youth and Radicalisation at NoSo. We would like to point out that to date we have received more than 100 applications from young slam writers from all over Cameroon for this edition.

The objective of the SLAMeroun festival is to facilitate artistic exchanges between the slam artists and the public. That is why we invite the people of Buea to come and share with us their thoughts on the need for stability and sustainable social cohesion in the North and South West regions of Cameroon.

Ebah Essongue Shabba
Ebah Essongue Shabba is a journalist, blogger and radio host from Garoua, North of Cameroon. He writes about media and cultural entrepreneurship with a focus on the Sahel region. He is also the president of 2H Kulture, a cultural association that works towards popularisation and dissemination of urban culture in the North of Cameroon by training artists and organising hip hop concerts. He is also the initiator of Woïla Hip Hop festival.