SLAMeroun, in the name of peace in Cameroon

From 20 to 23 June 2019, the first edition of Slameroun, an international Slam festival, will be held in Yaoundé, Cameroon. Placed under the high patronage of the Ministry of Arts and Culture, the event will welcome several guests, both in Cameroon and elsewhere.

“Slam in the service of peace in Cameroon”, it is on this theme that the first edition of Slameroun will focus. Slam is a vehicle for transmitting messages par excellence, not only because of its poetic style (even though it is on the edge of poetry), but also and above all because of the enthusiasm of the African public for this art over the past five years. The theme of this festival comes at the right time with the burning news of this beautiful country that is Cameroon.

For the slammer FaithFull, who also initiated the festival: “Cameroon has known war with the Islamic sect Boko haram in the far north of the country for almost 4 years and to this is added the crisis in the English-speaking area, as young people and also artists we say that this situation is no longer the sole responsibility of our authorities but of all possible means to safeguard the peace that is one of the pride of the Cameroonian people. It is in this logic that art in general and slam in particular should be one of the major tools to solve these scourges that undermine our country when we know the weight of the message that a slam text can convey when it is well written and declaimed for the common cause,” he explains. Cameroon needs peace, especially when we are aware of the strength and the breath of oxygen that Slam could bring in this situation. 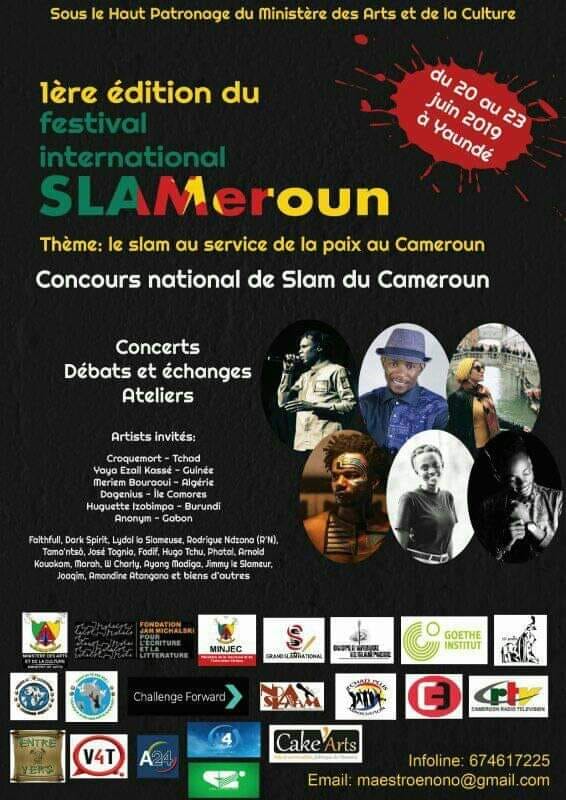 It should therefore be recalled that several guests are expected at this festival in Yaoundé, including the slammers Meriem Bouraoui from Algeria, Huguette Izombipa from Burundi and the anonymous slammers from Gabon, Yaya Ezail Kassé from Guinea, Dagenius from the Comoros and Croquemort from Chad. To them are added several Cameroonian artists, including one of the precursors of Slam in Cameroon Phatal and Lydol the slammer..

The Slameroun is a series of concerts for the general public, workshops, debates and exchanges and also and above all the national Slam competition which will make it possible to find a Cameroonian Slameur champion of the year. More and more Slam festivals are being born on the continent. The Chadian Slamor Croquemort describes: “Slam is a major art, it is played to a full house…”